CLASSIC OF THE WEEK: AUDREY HEPBURN FILMS, PART I

For once, instead of talking about one film, I would like to talk about all of the classic films that made Audrey Hepburn’s career. When people talk about Hepburn, they always mention how beautiful she was, her sense of fashion, her elegance. And of course, she was all of those things. But what we should hear first is that she was a dazzling actress. Funny or tragic, desperately in love or filled with imaginativeness, Hepburn delivered in all her pictures great and original performances.
My Classics with Audrey Hepburn will be divided in three parts. Today, I give you the first one:

No one has ever filmed Hepburn the way Wyler did. William Wyler, for some reason, has been somewhat forgotten in the list of great directors from the 30s to the 60s. And yet, we owe him a great deal of masterpieces. He is also the one who brought us Audrey Hepburn by putting her as the lead in ROMAN HOLIDAY (1953). Jean Simmons, another great actress, was supposed to play the part of Princess Ann but became unavailable. The director then decided to cast an unknown for the part. Hepburn’s incredible audition crushed all other possibilities. Here is her screen test:
The love story between Princess Ann and journalist Joe Bradley is now legendary. Among my favorite scenes is “the mouth of truth” one where Joe pretends that his hand has indeed been bitten off by the statue because of his lying. The gag wasn’t in the script and Peck improvised it thus surprising Hepburn who screamed. The scene was done in one take and the reaction we see is truly that of Hepburn, scared to death.
The film has that great mixture of comedy and romance and the Peck-Hepburn couple is delightful to watch. Wyler obviously understood the treasure he had found in Hepburn. It is interesting to see how from one film to the other, he starts filming her closer and closer, as if he wanted to capture the secret of such an amazing grace. Hepburn achieves the perfect balance between childish excitement and gravity. Her frail body, which will be used in many different ways by the directors she worked with, embodies here all the royalty and dignity that her character needs to convey. And we have no trouble at all believing she is a princess. And Hollywood thought so too and proved that she indeed was one by giving her an Academy Award for her performance in Roman Holiday.
THE CHILDREN’S HOUR (1961)
Audrey Hepburn was also a great tragedian. As Karen Wright in the Children’s Hour, her desperation and incomprehension brings you to tears. The dynamic that is created between her and Shirley McLaine is incredible, and the subject of the film was at the time very controversial. The two actresses play teachers at a girls’ boarding school who are accused by one of their students of being lesbians. The word is of course never mentioned, and Wyler had to be careful how he handled to subject to avoid censorship. But as always, it is much more interesting when things are unsaid, not shown but implied. According to Shirley McLaine, the actors didn’t really realize what the story really was about. But watching the subtle performances it is hard to think that Hepburn and McLaine were completely oblivious to the subject. In any case, Wyler certainly knew and he scrutinizes his actresses: the body and attitude of McLaine, and as before, Hepburn’s lovely face. 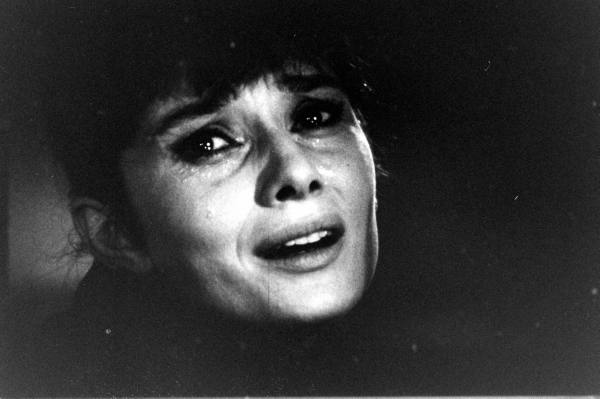 One of Hepburn’s assets is that she was incredibly expressive. The close-ups on her face become all the more relevant in the most tragic moments, when her pain tears up her face. Here, her frail figure becomes the symbol of her vulnerability in this world where everyone is willing to tear her to pieces.
HOW TO STEAL A MILLION (1966)
I will have to write again on this wonderful romantic comedy that stars Peter O’Toole alongside Audrey Hepburn. For once, Wyler chooses to film his star in color. And he offers a role to Hepburn a bit far off the ones he had offered her before. Hepburn is no longer the child she was in
Roman Holiday, so Wyler chooses to explore her kooky side. With a magnificent wardrobe (Givenchy, needless to say) and an extravagant make-up, Nicole (Hepburn) is a strong-headed girl, who will attempt anything to save her father from going to jail. She hires a man she believes to be a thief (Peter O’ Toole) to help her steal one of her father’s forgeries at a Paris museum. With witty dialogue and a crazy storyline, the film is so enjoyable that I watched it two times in a row the first time I saw it. With a splendid cinematography, the film benefits from its leading actors. The O’Toole-Hepburn couple satisfies every romantic soul, each one meeting his equal in the other, as far as talent, beauty and humor go.
My favorite scene is of course the closet one, the turning point in Nicole and Simon’s relationship. Hepburn is marvelous as she passes from a state of awkwardness because of their lack of space and privacy to the discovery of true love. The other scene is towards the end, when Nicole discovers that Simon wasn’t a thief. That scene is more of an O’Toole one, but it reflects the perfect harmony of their acting.
My first advice if you are in a Hepburn mood (and who isn’t?) is to watch first these three Wyler films and notice how the fascination of the director for his actress never stops but increases as he challenges her to take on very different, but equally grand, parts.
Have a very Hepburn week and see you next Wednesday for the second part of the Audrey Hepburn classics. Viddy Well!
E.C
23/05/2012, 7:04 AM GMT