CLASSIC OF THE WEEK

Welcome to Viddy Well’s first Classic of the Week!
Every week, we will talk about a classic film we have seen and share our love for old cinema. 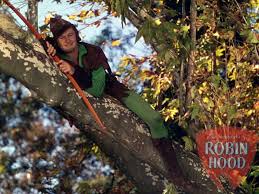 Of all the films I’ve watched growing up, The Adventures of Robin Hood is the one I’ve seen the most. I know by heart every single line and every single shot. Directed by the great Michael Curtiz, The Adventures of Robin Hood(1938) had a rocky shooting. Half of the film was actually shot by William Keighley but the director was fired when the producers felt that he was being too cautious with his use of Technicolor and that he didn’t get the best out of the action scenes. Curtiz then took the helm and, as always, did a wonderful job. However, his relationship with the two main actors, Errol Flynn and Olivia de Havilland was not so smooth. The two actors hated Curtiz who was a “tyrant” to them, often cruel and despising. None of this can be felt when you see the actual film. Robin Hood is the emblem of what Warner Bros did best in those years: a great epic adventure movie.
My passion for this film comes from the great entertainment it provides, from the magnificent use of Technicolor, the humor of the script and the sweet love story between Robin and Maid Marian. It also stems from my love for Errol Flynn and Olivia de Havilland. The couple starred in eight films together, all very entertaining and some truly beautiful (Dodge City, Captain Blood, The Private Lives of Elizabeth and Essex). But Robin Hood remains their masterpiece.
The glint there is in Flynn’s eyes is something few actors have: seductive, brooding, sensitive and, most of the time, mischievous. That mixture is seen best towards the end of the film, when Robin is arrested and sentenced to death. With a few wounds on his face, Robin keeps his cool when facing Gisbourne (a terrific Basil Rathbone) and continues to challenge him with his ironical remarks. But through his defiance, we can see that Robin is prepared to die. The costume in that scene is cleverly chosen: dark colors to contrast with his usual (and very fitting!) green tights and a red hood, to emphasize his vulnerability. 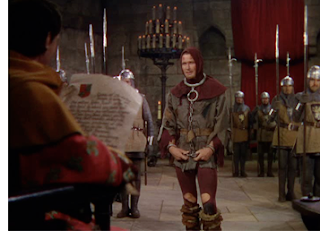 His first appearance in the film will remain as one of the greatest appearances ever made by a character. All the qualities of Flynn’s acting and persona can been seen at work. His childish play and irony with Prince John, his self-confidence, and of course his frown as he handles his sword.

The couple he forms with Olivia de Havilland is also quite dashing. Havilland succeeds in giving Marian some character – a difficult task since women in adventure movies were usually considered as props. Her spectacular costumes make her look very attractive and her strong personality creates a Marian who is determined to listen to her conscience. The balcony scene conveys the sensuality of both actors and is, in my opinion, the best love scene Curtiz will ever make in his career.

Let me mention in passing a few characters who add humor to the story: Will Scarlett, the bard, always playing his banjo and laughing his heart out, Little John, who famously throws Robin into the pond, and Friar Tuck, with his legendary appetite. I also take my hat off to the villains, Prince John (Claude Rains) and Sir Guy of Gisbourne (Basil Rathbone).

« Lindsay Lohan as Liz Taylor: Are you kidding me??? Jury for the 65th Cannes Film Festival »