Last February, the Academy Awards vastly celebrated the critically acclaimed French film «The Artist» directed by Michel Hazanavicius, which had already made itself noticed at the previous Cannes Film Festival.
Almost simultaneously, at the Berlin Film Festival this time, another partly silent film received a much quieter yet welcome greeting, with what felt like the rightly granted Alfred Bauer Prize and the FIPRESCI international Critics Award. The film is «Tabu» by Miguel Gomes, who previously directed «Our Beloved Month of August». Portuguese cinema is too rarely on the spotlight to make itself unoticed: Adopt Films already bought the US rights to the Berlin hit. With this prize came a second one: Portuguese short-film «Rafa» directed by João Salaviza also won an award.
A victory in many regards since Portuguese cinema took a severe blow at the beginning of the year: while drastic governmental measures were taken that led to budget cuts and the suppression of grants for the advancement of arts and culture, all national film production was postponed. The national Institute for film and television (ICA) froze all financial aid. It was with awe that the news spread among Portuguese artists, producers and technicians. The future of Portuguese cinema was to say the least – critical. Many were waiting for the governement to decide on a new law that was to be announced in February. In the meantime, «Tabu» won the prize, easing the tensions, and coming as both a mild relief and as an encouragement for Portuguese artists to keep hoping for less precarious times to come. A flicker of light at the end of the tunnel that was mantained when the new law came out stating that television channels are now to invest further in cinema. This decision came much later than in most of Portugal’s fellow European countries and the percentage of investment unfortunately remains still very low. A bittersweet resolution that feeds uncertainties – national film contests for grants for the year 2012 are still absent from the ICA website. With the current system of production, it seems fundraising is a slow, not-so-well-cogged, machine.
As for the film, release dates worldwide remain unsure. In France, the film will not be released before December 2012. I do urge you all to do one simple thing then, go to the movies! As this year’s Berlin Film Festival was here to prove, Portuguese cinema has stories left to be seen, and much more yet to tell.
To be continued…
E.D. 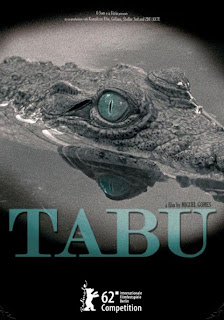